Home » News , Politic , Uruguay , Uruguay News » Uruguay is an example in Latin America for its way of controlling COVID-19 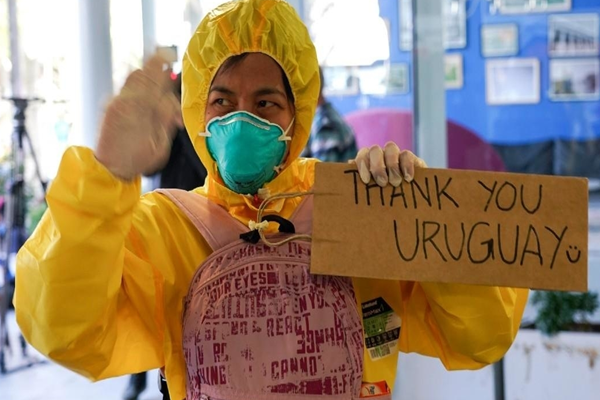 How does the world see the strategy applied against COVID-19 in Uruguay? Undoubtedly, Uruguay captures the eyes of the planet for its results in the face of the pandemic generated by this new coronavirus.

The small country located in the south of South America (between two powers: Argentina and Brazil), compared to other countries in the world and the region, has obtained positive and surprising results in a pandemic where almost a million people have died around the world. So far (according to official figures) in Uruguay 45 deaths have been registered due to COVID-19, this being a great achievement. Especially if we look at the figures of its neighboring countries where we can see that it is not even close to the number of deaths that these have daily. This led to the main press of the planet praising the management.

BBC: made a note in reference to Uruguay. It highlights the gradual return that the country is making to Education, the low rate of infections and the lack of affectation of the health system, certifying that "The Uruguayan case contrasts with that of other Latin American countries, a region that has exceeded Europe and the US in number of daily SAR cases. "
Neue Zürcher Zeitung: For its part, the Swiss media praised the measures applied in that place to combat the virus. "Apart from the big headlines, Uruguay does a remarkable job in the fight against the coronavirus", that's how the note is titled.
New Scientist also highlights Uruguay and Cuba as examples in America in the pandemic. In a scientific publication he explains how these two countries cut the disease without having to flatten the curve.
The portal also highlights that Uruguay, unlike Cuba, does not have an authoritarian government to stop the outbreaks. In addition, it has land borders, which includes a complicated exchange with Brazil, at the moment the epicenter of the pandemic in South America.
President Luis Lacalle Pou and his government team have established a strategy of "Conscious freedom". In that country there did not exist and will not exist the mandatory quarantine but its population abides by 95% of the use of all the necessary means to avoid contagion (temperature meters, use of masks, alcohol gel, hand washing, social distance, etc.) .
Regarding health, it is important to remember that there is a universal health system which allows 100% of the population to have access to medical consultations or to resort to a specialist, either paid or free of charge.
Tags News, Politic, Uruguay, Uruguay News
Newer Post Older Post Home