Messi turned 20 years since he arrived at Club Barcelona 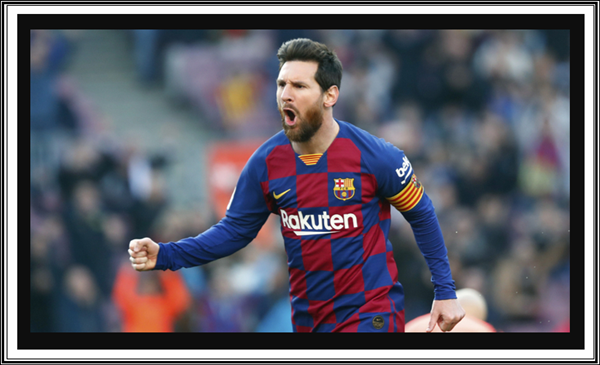 Nobody can ignore what Lionel Messi is as a footballer and his love for FC Barcelona (the club that formed him as a player). In recent months, his relationship with the board has not been the best, but even so, Astro Argentino still likes to wear the "culé" uniform.

The story began on September 17, 2000. Lionel Messi, accompanied by his father Jorge, got off the plane in Catalonia to prove his worth and succeed in Barcelona. Twenty years later, he became the top scorer in the club's history.

With him he won 34 championships, including four Champions League. In addition, he became one of the best footballers to step on the stadium and won 6 Golden Globes. Not even the last conflict of the “burofax” affair, through which the 33-year-old striker was about to leave the Barcelonista cast, can erase so much glory.

Carles Rexach, 72, continues to work in Barcelona as when he saw Messi's teenage actions in just a few seconds and decided to sign him, being, at that time, technical secretary: a unique milestone in the agency's career.

"Now it's easy because his superiority is too obvious, but when I saw him I said to myself: 'This guy is a phenomenon', and the first thing I thought was that if nothing strange happened to him, he shouldn't go crazy, he wouldn't have a accident, that he grew in stature, he had to go very far. Even once we signed him, we made him "cheat games," he revealed. What did they consist of? "We made him play against teams made up of much older people, but the ball he always had him, and that shyness that he had outside the playing fields would go away once it began to be played and it was another person, "he said in a dialogue with Infobae, in December 2019.

Although magic existed in his boots, his signing was not immediate or easy. "Some managers showed many obstacles because they said that Messi was very young and foreign (therefore, he could not be able to participate in the local league), but I think that my contact with the agent Josep Maria Minghella in Argentina was productive and he told me : Even though he's only 12 years old, "you must see him." But at that age and coming from so far away, I couldn't go there to see him. I told them 'let's do something, let him come to Barcelona with his family for a week and we'll see him in Barcelona', but there was an unexpected problem, that I had to go on a trip right at that moment, "Rexach described the first obstacle.

“I went as a player scout for Barcelona to the Sydney Olympics, and when I came back, they told me that the family couldn't wait any longer, and they even told me: 'He's a foosball player', then, when they arrived , I said: 'Well, tomorrow we put on a game and I see it', and as soon as I saw it, I realized that it was a phenomenon, but if you don't see it, in this case, you should go home and leave the put another, "he amused himself with his occurrence.

Even before the evidence of his talent there were more chapters in history until he confirmed his union with the Blaugranas. “I was in the first team and the boy came with his father to the club and there was no one to receive them, the days went by, they got angry, and that's when Minguella told me: 'Do something because you are going to lose it', and So I made a commitment to his father, taking a napkin from a bar and committing myself there to carry out everything promised, and so I put myself in front of everything, even to try to solve the situation of the father, who was a foreigner and He needed residency, but it was complicated, because the boy had to play as a free footballer, without a regular tournament due to his situation, although in the long run, I think that all these problems made him much stronger. It is not easy to be in La Masía being so small ”, Rexach continued the story.

The engagement date is December 14, which is not far from the formal contract. The napkin became a declaration of fidelity. Horacio Gaggioli, who represented Fabián Soldini and Martín Montero in Spain, played tennis with Rexach at the Pompeia del Mont Juic Club. Then they had lunch at the club's confectionery and Josep Maria Minguella joined the table. Gaggioli and Minguella quickly announced to Rexach the final decision they had made.

The most famous napkins in sports history read the following:

"In Barcelona, ​​on December 14, 2000 and in the presence of Messrs. Minguella and Horacio Gaggioli, Carlos Rexach Technical Secretary of the F.C.B. undertakes under his responsibility and despite some opinions against to sign the player Lionel Messi as long as we remain in the agreed amounts". 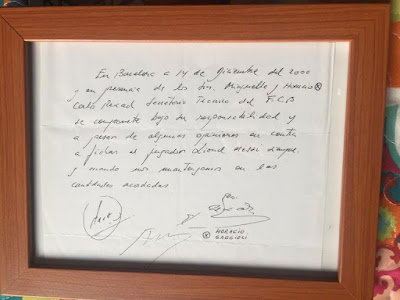 A few days later, they formalized the document before a notary public, and Messi began to prepare to move to Catalonia to capture the legend. Where is that museum piece now? It was left in the hands of Gaggioli, who today lives in Andorra, and kept it in a safe at the Crèdit Andorrà bank.

He received many millionaire offers for this historic document: from an American company to a museum in Tokyo and a British auction house. "But I will not provide it to anyone or plan to sell it. It will only be loaned to FC Barcelona, ​​which is visited by millions of people every year." In addition, Gaggioli told Infobae in 2018: `` I think it should be a priority together with Messi's Ballon d'Or, because that piece of paper has changed the contemporary history of the club. ''

This paper shows that this legend began on September 17, 2000.