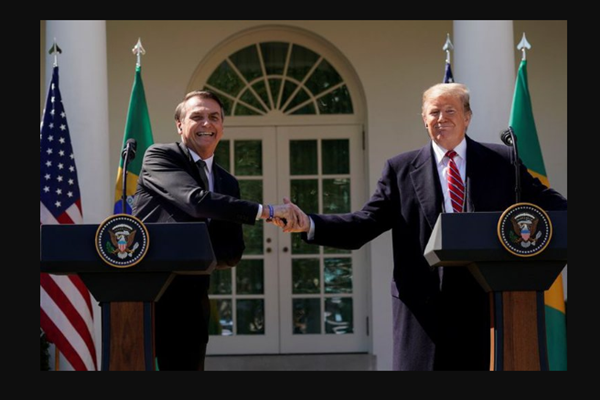 Jair Bolsonaro, Brazilian President, finally ratified his alliance with Donald Trump to fight against the Nicolas Maduro regime in Venezuela, noting that "We seek the common good." It was also recognized that Mike Pompeo's visit marked the close cooperation between the two countries to achieve the restoration of democracy in Venezuela.

"I congratulate President Donald Trump for his determination to continue working, together with Brazil and other countries, to restore democracy in Venezuela," he wrote on his Twitter account, along with a file photo of both leaders, shortly before six o'clock. the morning (local time, 9 GMT).

The Brazilian president also affirmed that Pompeo's visit to local Foreign Minister Ernesto Araujo in the framework of the welcome action "represents the close ties between the two countries in the search for common interests." 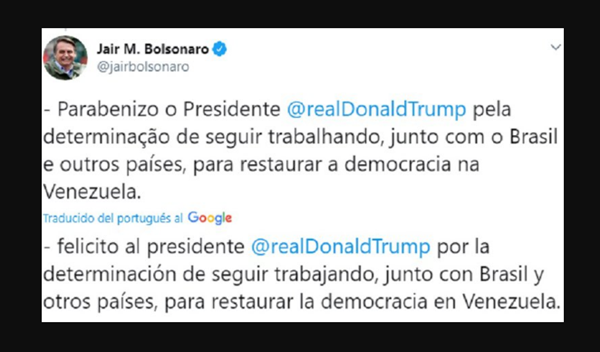 Bolsonaro, after completing his visits to Suriname, Guyana, Brazil and Colombia, ended the South American alliance against the Chavista regime and this Saturday ended a three-day visit to US diplomatic leaders. In addition, he announced an additional $ 348 million as "humanitarian assistance" to resolve the crisis in his country. With these funds, since 2017, the United States has added $ 1.2 billion for humanitarian assistance and development in the context of the political, economic and social crisis, which does not include the funds provided in the context of the coronavirus pandemic.

When Pompeo traveled through Brazil, it coincided with the publication of a severe United Nations report on serious human rights violations during the Maduro dictatorship. The Brazilian opposition made some criticisms, but Foreign Minister Arauyu emphasized foreign policy in his defense. The position of the previous government was stereotyped. In a report issued by the Ministry of Foreign Affairs, he said: “Between 1999 and 2018, Brazil's diplomatic experience with Venezuela was unpleasant. This is an example of ideological blindness and slavery. The material and moral interests of the people are very disadvantageous. "

In a statement published on the official website of the Ministry of Foreign Affairs, Araujo defended the opposition of the Bolsonaro government to the Chavista dictatorship, as he noted that it had decided to “break relations with Hugo Chávez and Nicolás Maduro during the indifferent silence and cooperation shameless criminal in that regime. This may be the worst humanitarian tragedy in the history of our region in two decades. "

The foreign minister also assured that "Maduro works permanently to undermine democracy throughout South America" ​​and denounced the persistence in Venezuela of "a regime allied with drug trafficking, terrorism and organized crime that threatens the security of the region."

“Making human rights prevail, as stipulated in the Constitution, demands that Brazil continue to raise its voice more than ever to expose the suffering of Venezuelans to world attention and work for the redemocratization of Venezuela, the only way to return to respect human rights in that country ”, he stated. And he sentenced: "We would violate the Constitution if we closed our eyes to the Venezuelan tragedy."

With Information from Infobae