Real Madrid was crowned Champion of the Spanish Football League 2020 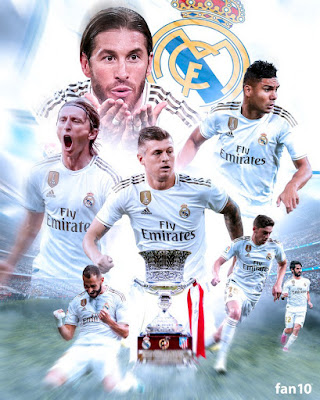 "A new championship came for Real Madrid with the victory over Villarreal. The team was relentless since the return of the competitions after the coronavirus pandemic and managed to win the La Liga title. Several protagonists who stood out could be singled out in the last journey to make this possible as Sergio Ramos and Karim Benzema, but without a doubt, one of the maximum responsible for this feat is Zinedine Zidane "; Thus began the note written in Diary Olé Argentina written by the journalist Facundo Cano Domínguez.

Chronicle of the Party Real Madrid vs Villareal

In the first half, Zinedine Zidane's team attacked nonstop, but there was only room for a single goal and go to rest with an advantage that could have been the championship score.
Both merengue came with a defensive error by Villarreal. Moroccan central defender Sofian Chakla executed an inaccurate pass that was intercepted by Casemiro, Luka Modric caught the ball and assisted for Karim Benzema, who scored his twentieth goal in this edition of La Liga.
In addition, Real Madrid lowered the revolutions and gave up possession of the ball a bit. Similarly, Villarreal did not harm Thibauth Courtois' fence, but they did hit the head of the goalkeeper with an unintentional knee from Xavier Quintillá.
The controversy invaded the Alfredo Di Stéfano stadium. The referee sentenced Sergio Ramos for a dubious infraction by Pau Torres. The execution was as follows: Ramos stepped on the ball so that Benzema entered the area and scored the goal. The controversy is that the Frenchman invaded the area remarkably and the referee Alfredo José Hernandez Hernandez decided to kick him again.
In this new execution, Karim grabbed the ball and crossed the shot to make it unreachable for goalkeeper Sergio Asenjo.
After the goal came the moment of hydration and with the resumption came the Villarreal discount. With a running center from Mario Gaspar's right wing, Vicente Iborra hit a great header to put the ball on Courtois' right post.
On the end, the Belgian goalkeeper saved the Madrid team from the tie. The former Atlético de Madrid and Chelsea goalkeeper made a spectacular double save so that Villarreal does not reach equality and secure the title.
In this way, Zidane's team won 2 to 1 and was crowned La Liga champion with 86 points, a mark that will be impossible for Barcelona to lose against Osasuna for what reached 80 units.
To obtain this title, the string of triumphs since soccer returned after the stoppage due to the pandemic was important. Of the 10 player matches, he won all 10. The serial victims were Eibar, Valencia, Real Sociedad, Mallorca, Espanyol, Getafe, Athletic Bilbao, Alavés, Granada and Villarreal.
This was the thirty-fourth time that Real Madrid won the Spanish League title. The last time they lifted this trophy was in the 2016/17 season.
Tags Real Madrid, Sports
Newer Post Older Post Home